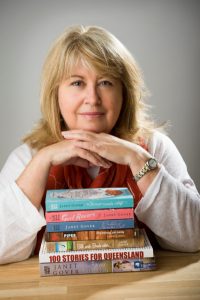 I grew up surrounded by books. Both my parents loved to read and they shared that love with me. In the tiny Australian bush town where we lived, there wasn’t a lot to do except read and ride my ponies.

After some fun-filled years at Queensland University (during which I passed the occasional exam), I became a television journalist, first in Australia, then in Asia and Europe. I’ve seen and done a lot of unusual things. I met some interesting people, including one Pope, at least three Prime Ministers, a few movie stars and a dolphin.

I also discovered that most interesting people are often the ‘ordinary’ people – who sometimes have quite extraordinary stories to tell.

My first published fiction, a short story called The Last Dragon, appeared in 2002. I love writing short stories and you can check some of them out for free here. My first published novel, The Farmer Needs A Wife was released in 2009. Since then I’ve written more than a dozen books, mostly set in Australia, but also including one Royal Wedding romance, because who doesn’t love a royal wedding. My Coorah Creek series has won or been shortlisted for awards in the UK, USA and Australia – which just goes to show we really do write for an international audience.

In collaboration, Alison and I write as Juliet Bell. Juliet has a love for classic literature, and enjoys taking a closer look at heroes who are not all that heroic.

I am a specialist in online training, and an IT instructor, but best of all, I love working with new writers, just starting their journey as I did all those years ago. I enjoy working to develop writing skills and story ideas, as well as working with a finished manuscript to help it be the very best it can be.

I look after the New Writers’ Scheme run by the Romantic Novelists’ Association, and am part of their learning team.

Check out my website www.janetgover.com for more about me and my books and my mentoring services. You can follow me on twitter @janet_gover or find me on facebook.com/janetgoverbooks.

What people say about Janet’s books:

“Janet conveys the vastness and emptiness of the outback beautifully. She contrasts light and dark so well – both in time and in people.”

“This is one of the best books I’ve read this year! Well-written, immaculately researched and with all the right ingredients for an emotional roller-coaster of a ride.”

“Written with passion and with an air of authority in terms of the location, this is a story to be savoured”

Contact Us
For more information about our services, e-mail info@fictiontutors.co.uk